Kernza Grain: Toward a Perennial Agriculture 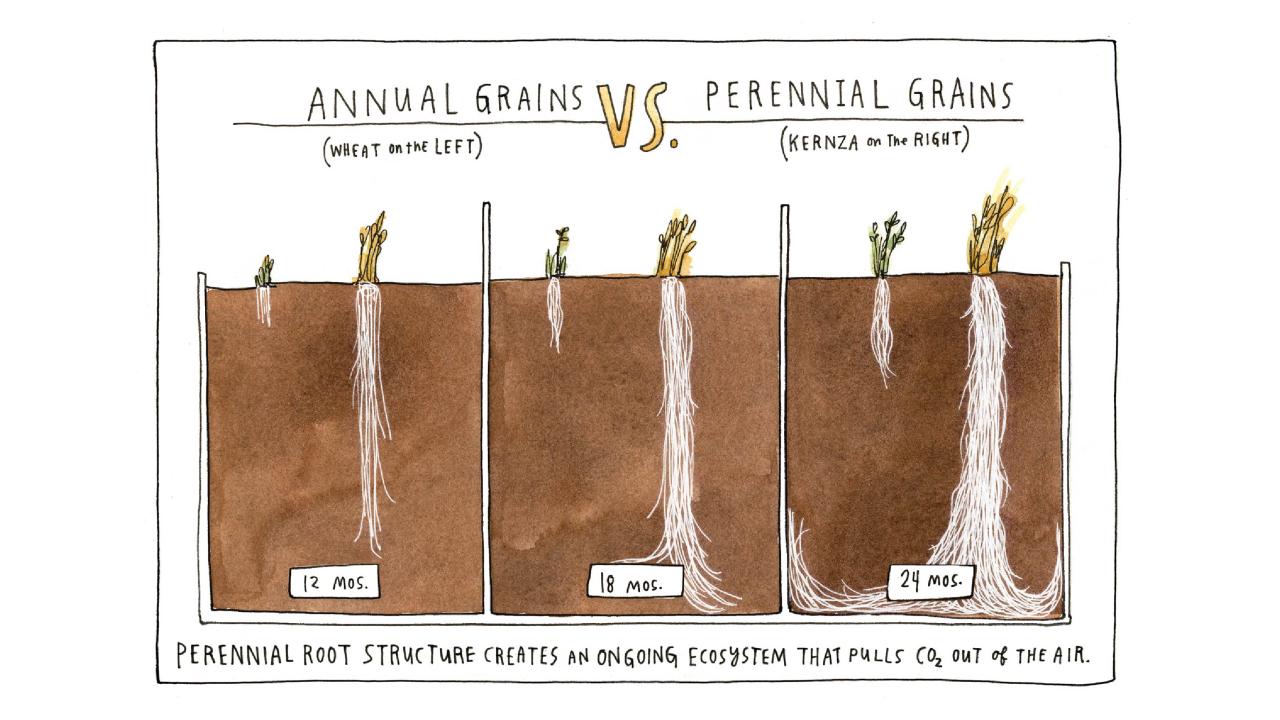 From Perennial Wheatgrass to the Kernza Grain

The Land Institute’s breeding program for intermediate wheatgrass began in 2003, guided by Dr. Lee DeHaan. Multiple rounds of selecting and inter-mating the best plants based on their yield, seed size, disease resistance, and other traits have been performed, resulting in improved populations of intermediate wheatgrass that are currently being evaluated and further selected at The Land and by collaborators in diverse environments.

Experiments are also underway to pair Kernza with legumes in intercrop arrangements that achieve greater ecological intensification, and to utilize Kernza as a dual purpose forage and grain crop in diverse farming operations.

Although Kernza grain has made its way into the commercial supply chain in small niche markets, our goal is to develop varieties of Kernza that are economical for farmers to produce at large scale.

The breeding program is currently focused on selecting for a number of traits including yield, shatter resistance, free threshing ability, seed size, and grain quality. We project that the first Kernza variety will be more widely available by 2019.

In the next 10 years, we aim to have a crop with seed size that is 50% of annual bread wheat seed size. Our long-term goals include developing a semi-dwarf variety and improving bread baking quality.

Ultimately, we hope to develop a variety with yield similar to annual wheat and to see Kernza widely grown throughout the northern United States and in several other countries around the world. If that vision becomes a reality, you might see Kernza perennial grain in common staples found on grocery store shelves.

Kernza in the Field

Kernza grain plants are deeply rooted. Walking through an established field of mature plants, they are about chest high above the soil. The roots can extend 10 feet or more beneath the soil surface, more than twice the depth of and in greater density than annual wheat roots. In good conditions, the long, slender seed heads can contain more seeds than an annual wheat head, but Kernza seeds are currently about 1/5th the size of most conventional wheat seeds.

Kernza grain grows best in cooler northern latitudes. Although intermediate wheatgrass was consumed in ancient times, new varieties of Kernza grain can enable farmers to grow it profitably at scale and bring its environmental benefits to modern farms and diets.

The Land Institute developed the registered trademark for Kernza grain to help identify intermediate wheatgrass grain that is certified as a perennial using the most advanced types of T. intermedium seed.

When you buy Kernza perennial grain, you can be certain that you’re eating product grown on a perennial field that is building soil health, helping retain clean water, sequestering carbon, and enhancing wildlife habitat.

Patagonia Provisions was the first company to develop a commercial retail product made from Kernza® perennial grain for the mainstream marketplace.  Patagonia took a significant risk, breaking through the initial barrier to new product development and market entry.  That first-to-market product is Long Root Ale.

The initiative and investment on the part of Patagonia Provisions to bring Long Root Ale to market helped pave the way for other partnerships and potential Kernza products becoming more widely available to consumers.

Currently, there are a number of restaurants serving products made with Kernza®, including Birchwood Cafe in Minneapolis, The Perennial in San Francisco, and Avalanche Pizza in Athens, OH.

Hopworks Urban Brewery in Portland, OR and Vancouver, WA brewed Long Root Ale for Patagonia Provisions and has it on tap, in addition to the ale in four-pack cans being sold in Whole Foods in California.  Bang! Brewing in St. Paul, MN has a Kernza beer available, as does Blue Skye Brewery near us in Salina, KS.

Innovative Dumpling & Strand produces Kernza® pasta that they retail through Twin Cities-area farmers’ markets. There are a few other small-scale retail food outlets scattered around the country, but to our knowledge, those are the most reliable sources right now.

Additionally, Cascadian Farm is excited to incorporate Kernza into some of its foods, with expectations for products made with Kernza available in retail markets by late 2019.  Cascadian Farm has agreed to purchase an initial amount of the perennial grain which allows us to arrange with farmers to plant on commercial-scale fields versus the test sized plots currently being grown.

General Mills (parent company of Cascadian Farm) approved a $500,000 charitable contribution to the Forever Green Initiative at the University of Minnesota in partnership with The Land Institute, to support advanced research to measure the potential of Kernza to significantly reduce greenhouse gas emissions associated with food production, determine best management practices for sustainable production, and increase Kernza yields through breeding.

The hope is that increased demand for Kernza products translates into more growers and acreage dedicated to Kernza perennial grain, resulting in more Kernza in production and on shelves, which in turn encourages more research and development into Kernza and other perennial grains.

Patagonia’s and General Mills’ early commitments to create a market for Kernza are  significant milestones.  Yet the transformation to an agriculture and a food system based upon perennial grain crops is a complex and long-term endeavor requiring support for Kernza; other perennial grains, oil-seeds, and legumes; and agro-ecological research beyond that which market forces alone can provide at this critical juncture.

The Land Institute has been leading this research effort for forty years and we welcome your support of our work to help sustain the next vital stage of this agricultural revolution.

Kernza grain is the first perennial crop from The Land Institute’s work to be introduced into the agriculture and food markets, but our researchers are currently working on others, including perennial wheat, perennial rice, perennial sorghum, and wild sunflower, with more to come.

Find out about other perennial crops under development at The Land Institute on our Perennial Crops page.

Kernza® on the Plate

Starting with hobbyist bakers on staff at The Land Institute, Kernza has been tested in kitchens across the country for over a decade. Innovative chefs, bakers, brewers, distillers, researchers, and growers are using Kernza in place of or combined with wheat or other grains.

It can be used in baked goods and is now being sold in a number of restaurants including The Perennial in San Francisco, California, and Birchwood Café in Minneapolis, Minnesota. Many others have tested it in their products and kitchens. Although current strains of Kernza grain are lower in gluten strength than annual wheat, consumers sensitive to gluten should exercise caution.

At this point, Kernza is most frequently blended with annual wheat flour to make bread, and can make up 100% of the flour in quick breads (muffins, pancakes, etc.) or served as a pilaf like rice.

Kernza has also been brewed into beer and distilled into spirits by a number of producers nationwide, most notably Long Root Ale from Patagonia Provisions.

Ships today are travelling 17.4% slower than before Lehman Brothers collapsed